Engel coolers and Yeti coolers are two of the most popular brands available, but which one is truly the best?  Engel makes the claim to the first roto molded cooler, yet Yeti is one of the most desired on the market. Here is the scoop you have been waiting for regarding Engel coolers vs Yeti coolers. [Multiple Of Our Own Video Tests Below]

We have now (multiple times) tested all of the top rated, high end roto molded cooler brands over five days to see just how long these coolers can maintain ice. One of the most interesting results was Yeti Vs Engel. The Engel Deep Blue Series 50 Q cooler held ice significantly better than the Yeti Tundra 45 (actually 37 quarts). Many might be inclined to immediately jump to the defense of the Yeti Tundra 45 as it is a smaller cooler than the Engel 50 Q. However, it’s worth noting that during this test, coolers smaller than the Yeti Tundra, specifically the Canyon Outfitter 35, held ice longer than the Yeti Tundra and Engel 50 Q. This should not be true if a larger cooler were to hold ice longer merely because it’s a larger cooler. We added even more truth to this when we tested 20-25Q coolers. The Yeti Roadie (20Q) and Engel 25Q held ice roughly the same length of time with a slight edge in favor of the Yeti Roadie.

Furthermore, we ran a test within a test between two Igloo coolers. Present in the Five Day Ice Challenge was an Igloo Sportsman Series 40 Q and a Sportsman Series 50 Q. Same manufacturer, same model cooler. If the theory that a larger cooler should maintain ice longer simply because it is lager were to hold, then surely the Igloo 55 Q should hold ice longer than the Igloo 40 Q. However, this was not the case at all. They maintained ice at roughly the same rate. Again, the Canyon 35 Q held ice better than the Yeti Tundra 45, Igloo 40 and Igloo 55Q. Therefore, we cannot say that it was a fluke that the Engel Deep Blue cooler held ice significantly better than the Yeti Tundra. See the picture below to see the evidence of a smaller cooler holding ice on par with a larger cooler and how the Engel Deep Blue compared to Yeti Tundra. See the video comparison further below in post.

Now, to be fair, we have make an important point clear. Rather than factoring in cooler size alone, ratio of ice to the size of the cooler is a much more telling indicator when considering maximum ice retention times. For example a 20Qt cooler will hold ice long than 60 quart cooler when only 20 lbs of ice is used. 20 pounds of ice will fill a 20qt cooler to capacity and leave the 60 qt cooler maybe 1/4 filled. We validated this point with the 20 Pound Ice Challenge. You can also check out all of our videos here: More Videos⇒ When Quality Counts: Engel Vs Yeti

Engel is a company that has been committed to keeping your necessities cold for nearly 50 years. They offer a variety of cooler styles. Engel specializes in coolers that have 2 inches of insulation to keep foods, bait, fish, and more cold for days, even during the most extreme temperatures. Engel coolers have a warranty of up to 10 years.

Yeti Coolers have become a very popular choice for everyone since they first went into production in 2006. They are built with the serious hunter’s, campers, tailgaters, and backyard barbecue enthusiasts in mind. These coolers offer a variety of sizes. They are all made of top quality materials, which is backed up by its 5 year warranty. With Yeti you have a variety of choices. Yeti offers different sizes and capacities, and of course their coolers claim to provide maximum ice retention. Keep in mind that Yeti coolers are quoted in MODEL sizes and not Quart capacity. In other words a Yeti Tundra 35 is actually 37 Quarts. This is not a negative, just an important point to keep in mind. To provide this maximum life for your cooler’s contents, Yeti manufactures coolers with 2” or more polyurethane insulation as well as freezer quality sealing gaskets and one piece roto molded construction. 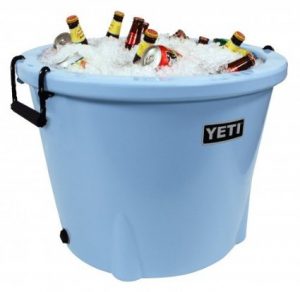 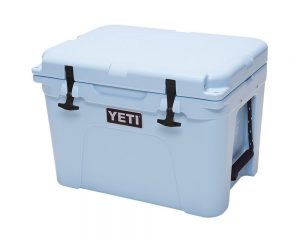 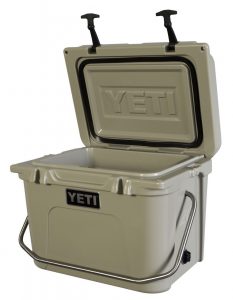 The DeepBlue is Engel’s most heavy duty cooler. It provides 2 inches of polyurethane insulation all around, a silicone freezer gasket to keep the lid tightly closed, nonskid lids and optional nonskid pads. The cooler floor is slightly pitched to aid you in draining the cooler without dumping out what is inside. They have a variety of ways for you to tie it down so that you do not have to worry about your cooler tipping over, sliding around, or coming open when moving about. Most importantly, Engel has consistently finished among the top in all of our cooler reviews. Both the Yeti and the Engel have true die-hard fans. This even goes to the extent of true blue fans whom say “do not waste your money on a Yeti.” Some people have experienced faulty quality with both types of coolers. This is where the solid warranty of both can be appreciated. If you’re only concern is ice retention, you’ll be happy to know that both coolers can maintain ice for a full five days even in extreme temperatures (highs of 95 in Central FL).

When looking at Engel coolers online, you will see that many models may not have as many buyers as the Yeti, but the overall satisfaction of those whom have bought Engels are high. A glance through our full Engel Deep Blue cooler review will go into greater detail as to why these coolers are a top choice for just about any adventures.

With Yeti coolers, you will find slightly higher numbers when it comes to those who have actually purchased a Yeti AND you will still find an overall average satisfaction rating of 4-5 stars. Most owners of Yetis will comment that it is more expensive, but that it will be the last cooler you will ever need to buy. Read our most popular Yeti Tundra Review Here⇒

In an even more recent ice challenge, we discovered that an Engel cooler can last up to 10 Full Days (video at bottom of post). In terms of ice retention times, we have found Engel coolers to be superior. However, Yeti coolers are not far behind, holding ice roughly a day less than Engel. When it comes to build quality, both coolers are incredibly comparable. The latch system being the biggest difference. After more than a year of regular use with the Engel we have seen some pitting in the lid.  However, this has not compromised performance; rather, a cosmetic defect. The same can be said with the Yeti. Although, not pitting, we have found the Yeti more prone to scratches. In either event, these are merely minor details, but there are some who may consider this a concern for the price of the cooler.

The battle between Engel Coolers vs Yeti is a battle that will continue indefinitely. Even Engel coolers claim that Yeti used their design idea and failed. It is all about what you, the user, want from your cooler. The Engel coolers are slightly cheaper than the Yeti, so if cost counts most to you, Engel could be your best bet. However, if you want something that will last forever, that prestigious name, Yeti may be best. If you want your ice and the contents to last for days, both will be able to handle the job, but some say that Engel is best. In our test, Engel definitely held ice better than Yeti.