This test has been a long time coming. Ever since our very first ice retention test, many of our YouTube subscribers wanted to see how does a budget cooler stack up against the high end roto molded coolers. The idea of this test was to see the difference in performance between an under $100 cooler vs higher end coolers ($200-400). The results of this test were very impressive, revealing several cheap coolers which can actually outperform some roto molded coolers.

We followed the exact same testing protocol which we have followed for nearly all of our ice tests. Following the same procedure allows a comparison to be made across multiple tests, budget cooler or not. All coolers were pre-chilled for 24 hours. Although pre-chilling is less of a concern with these type of coolers (less insulation) we wanted to be consistent. All ice was purchased at the same time from the same marina. In fact, we spent over $300 in ice to conduct this test.

After the coolers were chilled for 24 hours, we topped them up with ice. Again, this was the same ice from the same marina which we had stored in extra coolers. While topping the coolers off with ice we also drained the ice melt which had occurred over the course of the first day of chilling.

Two beverages were then added to the top of the coolers. We do this with all of our ice tests as it provides a visual representation for viewers to gauge the progression of ice melt. This also allows us to rotate the beverages three times a day which simulates actual use. We rotate the beverages from top to bottom (and vise versa) which introduces warm air to the cooler and allows us to monitor the progression of ice melt morning, afternoon and evening.

We also used thermometers placed on the surface of the coolers as well as inside. Every day during the test, with the exception of one day in which it rained, lid temperatures were over 100°F. The coolers were left outside (day and night) for the duration of the test. 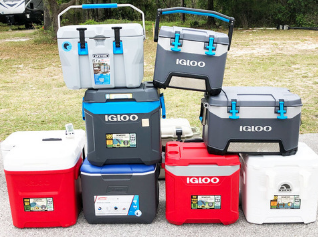 As we mentioned, the results of this test really blew us away. We did not expect these low priced coolers to last nearly as long as they did. In fact, it took NINE days to reach the end of this test. Almost all the coolers held ice for over 5 days, which is incredible in itself. However, to be fair, we have to mention that these coolers were filled to capacity with ice. Many will not experience similar ice retention because the cooler will be filled with food, drinks & ice…. not just ice. We test in this fashion to give a best case scenario in extreme temperatures. In order to test with food, drinks, etc, we would be buying a ton of the exact same items, which from a testing standpoint this is not realistic on a large scale. Needless to say, those whom buy a cooler and use it realistically are more than likely to experience lower ice retention numbers. Having said that, for the sake of the test, we accomplished exactly what everyone wanted to know, what is the cheapest cooler which provides the best performance.

Considering some of the coolers tested held ice on par with many roto molded coolers, we feel it’s only fair to compare construction and durability. Durability and overall build quality of these coolers is where the biggest difference lies. Coolers which cost less than $100 are significantly less robust compared to Kong, Orca, Yeti, etc. This should not surprise anyone and as the old adage goes… You get what you pay for. Having said that, some of the economical coolers were built better than others. Among the best built were Lifetime, Igloo BMX and Igloo Quantum. All of these coolers were able to support 220 lbs on the lid, standing & sitting. More on that below.

All of these coolers were more susceptible to scratching and scuffing when compared to roto molded coolers. With the exception of Lifetime coolers, all of these coolers leaked water when we leak-tested them. From this test you can conclude the quality of the seal (if any) on each model.

The Lifetime lineup of coolers are hands down the best bang for the buck. We have now tested all available sizes 28 quart, 55 quart and the 77 quart. All of which have offered superior performance. In fact, the 77qt Lifetime held ice longer than many roto molded coolers. For a cooler that can be purchased for less than $160ish this level of ice retention is truly impressive. We also notice that the 28 and 77 quart Lifetime came with new and improved lids. Our only complaint with the 55qt was a less than sturdy lid. However, this was not the case with the newer models. In fact we decided to specifically test this by sitting and standing on the cooler. Lastly, neither of the newer models leaked when violently shaking or tipping the coolers on their sides. Long story short, if you do not need a roto molded cooler or a cooler with wheels, its hard to make an argument against buying the Lifetime. 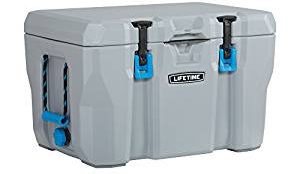 The Igloo Quantum was the best cooler for ice retention for under $100. For roughly $60 you can buy this wheeled cooler that held ice for 7.75 days. We also felt that the lid was the most robust among the affordable coolers we tested. We were able to stand and sit on this cooler without the lid caving in. The included rod holders and cup holders, which attach to the front of the cooler, make this suitable for fishing, beach days or as a marine cooler. The wheels on the Quantum are capable of handling asphalt, grass and even sand relatively easy. See our video here (coming soon). 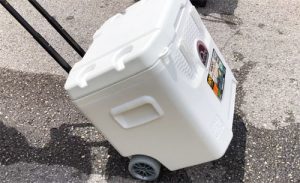 Thanks to our Subscribers, this cooler came highly recommended. After reviewing the BMX 25 and BMX 52 it is easy to see why this cooler was regularly recommended. In terms of ice retention, the BMX52 was right behind the Quantum and MaxCold, which put it on the upper end of performance. We also found the BMX to be among the most durable. We did drop the smaller 25qt off the back of a golf cart (on accident of course) which resulted in scratches, but far from damaged the cooler. The BMX most resembles a high end cooler in terms of looks and feel better than any other of the economical coolers we tested. The 52 quart held ice for 7 days and the 25 quart held ice for 6.5 days. For those looking for the perfect day cooler or lunch box, the 25 is the perfect fit and at roughly $69 it’s a budget-friendly option. 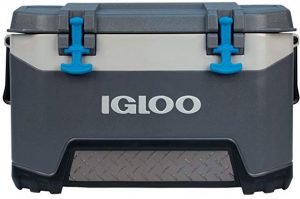 The Igloo MaxCold was right behind the BMX 52 in ice retention at just over 7 days. The build quality is not as robust as the BMX but then again this is one of the cheapest coolers in our list. Although the MaxCold is a rolling cooler it comes with handles as you would expect on a non-wheeled cooler. The handles are a nice touch that make getting it in and out of a truck/SUV much easier. The wheels are slightly smaller on the MaxCold compared to the Trailmate or Quantum, but still handled asphalt and grass with ease. In the sand, the MaxCold was a bit more difficult to roll compared to the other two. Having said that, we still have to come back to the price-point, this is still a screaming buy for the price. 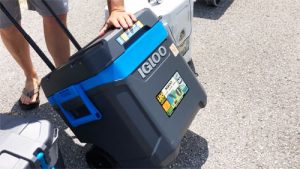 The Island Breeze is neither the best for ice retention nor durability, but it is very easy on the pocketbook. This is our go-to cooler if you need something cheap and readily available. You can find this style cooler at almost any big box retailer during the spring and summer months. The Island Breeze is probably one of the most popular wheeled coolers for this reason. For roughly $50 you’ll be buying a cooler that is capable of holding ice for up to 5 days. As an added bonus, you can usually find the Island Breeze in multiple color schemes to fit your style. The Igloo Latitude is roughly the same price as the Island Breeze above, but we feel this cooler provide a little more style. For what it’s worth, this cooler was a favorite among our friends and family members. Our best guess is due to the snazzy color scheme, which actually comes in multiple colors. Aside from the cool look, the Latitude 60 provides roughly 5.5 days of ice retention. The lid is not as robust as the Igloo Quantum, but we were still able to sit on without it completely caving in. The lid will sag a bit, so we don’t recommend regularly using it as a seat, but in a pinch it was able to hold my hefty bum. Pick this cooler if you are looking to make a stylish statement with respectable ice retention. 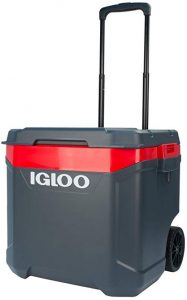 Everyone wanted to see a “regular Coleman cooler” and that is exactly what this cooler is. This is a no-frills rolling Coleman cooler. The Coleman 60 & Coleman 50 both held ice for roughly 5.5 days. Although this is a relatively impressive number, it was on the shorter end compared to the other coolers in the test. Having said that, these are among the most prevalent coolers available. You’d be hard pressed to visit a big box retailer or sporting goods store and not find a standard Coleman cooler with wheels. This cooler is for those looking for the cheapest option that’ll still get the job done. 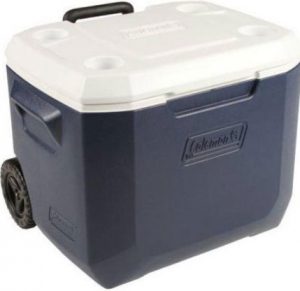 Like the Latitude 60 Wheeled cooler above, this too was a fan favorite. I guess this should come as no surprise considering they are available in the same color schemes. This was the first cooler to drop out of the ice retention challenge. On the flip side, this cooler retails for only $30. The Latitude 50 held ice for 4.5 days which is still respectable especially considering the cost. This cooler does not have a drain/plug, but is available in multiple colors/schemes. 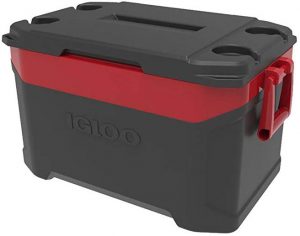